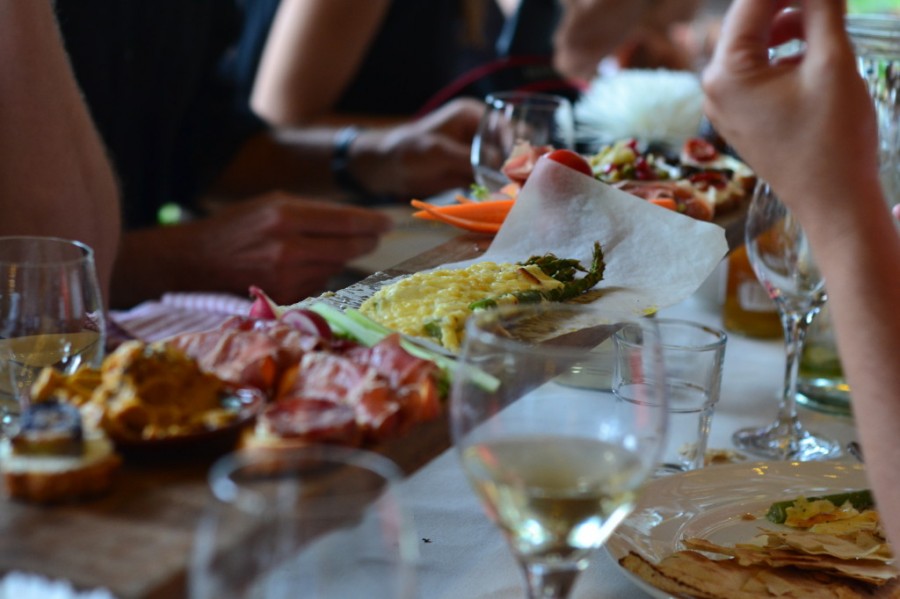 Recently I held a dinner party for all of our friends to celebrate mine and The Contemporary Builder’s 35th birthdays. It was an excuse to go all out. 30 guests, table linen, flowers, fairy lights and four courses. Plus celebrating the sale of my business and having friends over since the birth and homecoming of Thea months earlier was dramatically overdue. As a group our lives have  changed intensly over the past few years, as we have paired off and become units of three and four, with the welcome addition of tiny versions of ourselves. The tiny people in our lives  can make it tricky to meet up en masse, especially in the evening. So the date was set, the baby-sitters booked and the planning commenced. For the entree I wanted to put together an array of visually stunning canapés, presented on a long board that would run down the centre of the table. Something that would wow guests from the get go and set the scene for the evening. 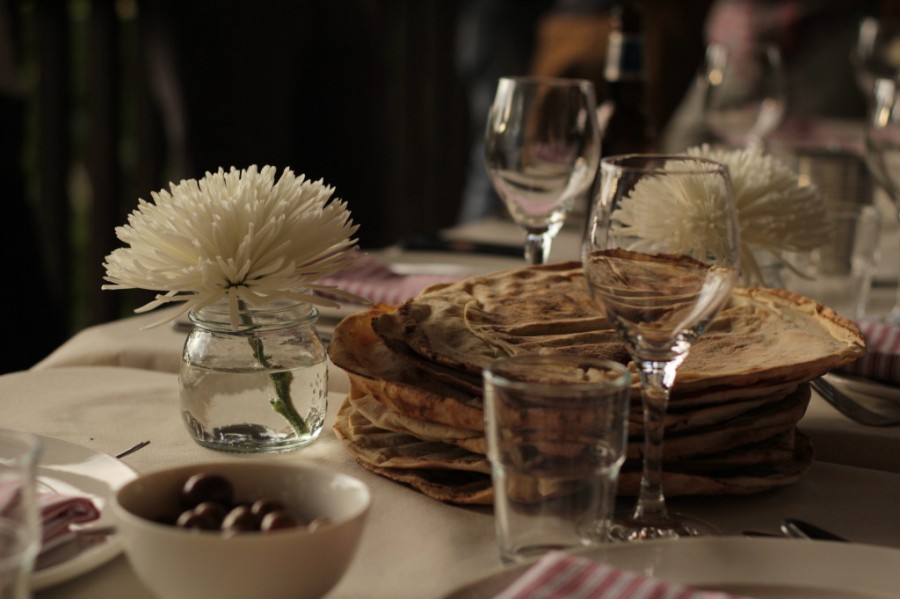 I found inspiration for my entree among other places in Ottolenghi’s Jerusalem. A picture of a dip drizzled with a dark, glossy syrup and freckled with black and white sesame seeds caught my eye. Upon reading the recipe, the dip was butternut pumpkin, the method seemed straightforward, but the garnish. Date syrup. The combination sounded intriguing and I could imagine how the rich date liquid would set off the pumpkin dip. As it was an all out dinner party, I decided to challenge myself and have a go at my own homemade date syrup. 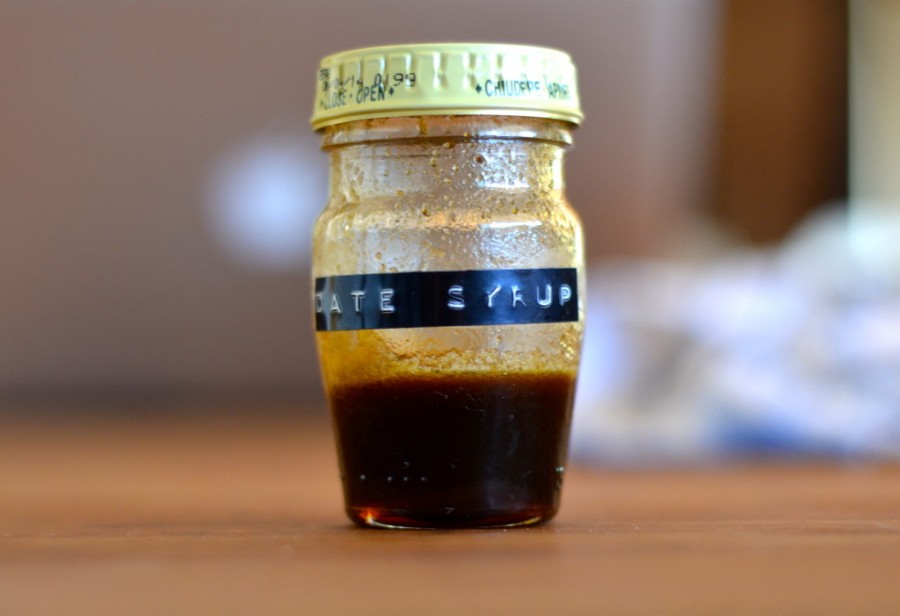 With only two ingredients, making date syrup is a simple process that requires time rather than action. I have successfully teamed it with my morning porridge and grilled goats cheese on toast. It transforms into a deliciously sticky salad dressing to go with a green salad, liberally tossed with sautéed sliced red onion and toasted, chopped almonds, when whisked together with some extra virgin olive oil and red wine vinegar. I reckon over ice cream with some smashed nuts or rolled inside pancakes with cream would hit the spot too. 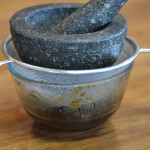 Method-soak the dates in boiling water overnight. In the morning, place a fine mesh sieve over a bowl and line it with a piece of cheese cloth or a Chux. Pour the date mix into the sieve. Bring the corners of the cloth together and squeeze out the liquid. To make sure I got all the liquid from the dates, I secured the cloth with an elastic band and then weighted it with a mortar and pestle, again overnight. In the morning, simply reduce the resulting liquid in a pan over a low heat (too high and the syrup boils over) for about 10 minutes. 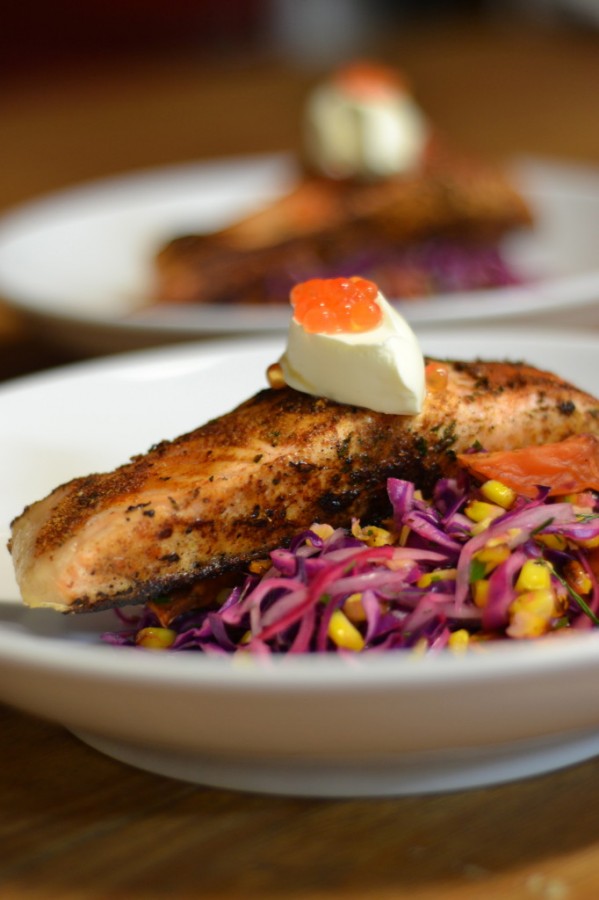 Up until six o’clock last night I din’t know what I was going to cook for dinner. Inspiration hit me whilst I was out on my evening run, on the return leg of my tri-weekly training session for the Sydney marathon. I’m still in the very early stages of clocking up the kilometres to make my dream of running a marathon reaity and sometimes it feels like my efforts will be in vain to complete the 42 kilometre race. Other days I realise that I am actually getting fitter and that there may still be hope of crossing the finishing line in September. With increasing mileage to come, I’m sure I will have a lot of time to ponder the contents of my fridge and what’s on the menu for dinner. In my fridge last night I had two pieces of salmon, some corn, sweet potato and red cabbage to play with. What might make these ingredients into a satisfying meal? And quickly because it was late and exercise works up an appetite!

To be honest, this is one of my favourite games, putting together a few ingredients and creating a coherent meal from them. Cabbage lends itself to slaw, finely shredded with the addition of salt and lemon juice. Sometimes when making coleslaw I add carrot, onion, fennel, celery, even apple to make a refreshing, crisp and colourful salad. Corn is great cooked directly over the flame on the barbecue, until the kernals are blackened and smoky. At this point you could smear the cob with mayo and anoint with some finely grated sharp cheese like Parmesan, or simply cut the kernels from the cob in long strips and smother them with salt and butter. Sweet potato can be mashed, roasted, cooked whole, in wedges or cubes. As for the salmon, there are so many ways to cook this fish, but by far my favourite method is skin side down, in a pan with a drop of oil, over a medium heat for about 10 minutes. I don’t turn the fish, but watch as it becomes a paler shade of pink from the bottom up. The skin turns to fish crackling, while the interior remains pink and moist.

The seasoning that springs to mind to unite the cabbage slaw, charred corn, roasted sweet potato and crisp skinned salmon is Cajun. A smoky, slightly hot spice mix that lends itself to barbecue cooking and can quickly and easily be made with ingredients from the pantry and garden. Rubbed over the salmon before cooking, it brings together the produce lurking in my fridge into a pretty alright week night dinner. 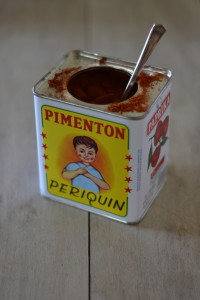 Simply combine all ingredients and roll your desired protein in the mix before cooking. The above amount made enough for two pieces of salmon.

Mix all ingredients and leave to mingle while you cook the salmon. Plenty for 2.