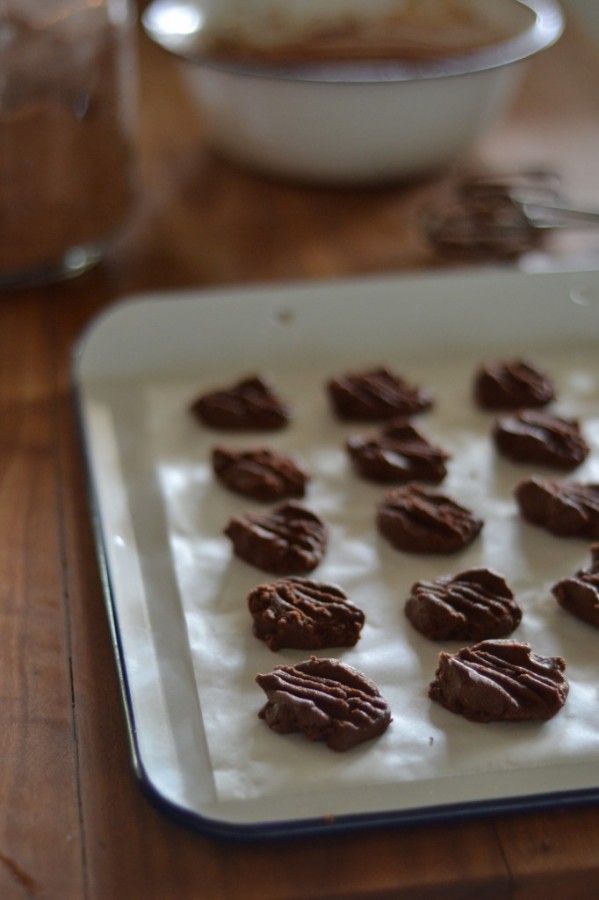 At the Beaches Farmers’ market last week I spotted this wonderful Falcon baking tray at the Lost and Found department. It immediately sparked in me a desire to bake, particularly some chocolate fork biscuits. I have a fondness for kitchen equipment of a bygone era. It seems to speak of the values of cooking in which I believe. Quality ingredients made by skilled, passionate producers, food grown in accordance with nature and things done in a time honoured, patient manner. So I bought the blue rimmed tray and went home to make a batch of chocolate biscuits. 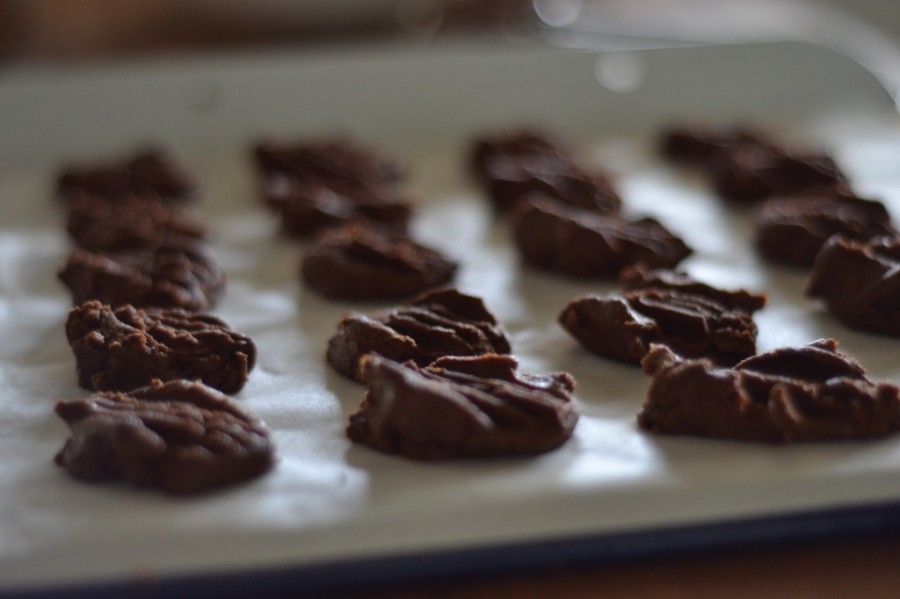 I’m not the biggest baker. I prefer to roast and stew. That said, I do have a tried and tested collection of baking recipes which I return to again and again. Chocolate fork biscuits is among that collection. They are very easy to prepare with just four ingredients and a batch of these crumbly little morsels can be whipped up with very little notice. Romantically, I imagine in the not too distant future, making them with Thea, her getting as much mixture around her little mouth as she makes into balls for biscuits. Taking a fork and pressing it into the chocolate dough to squash it onto the baking tray. Chomping on them straight from the oven, crumbs dropping everywhere, her fist wrapped round a glass of ice cold milk. 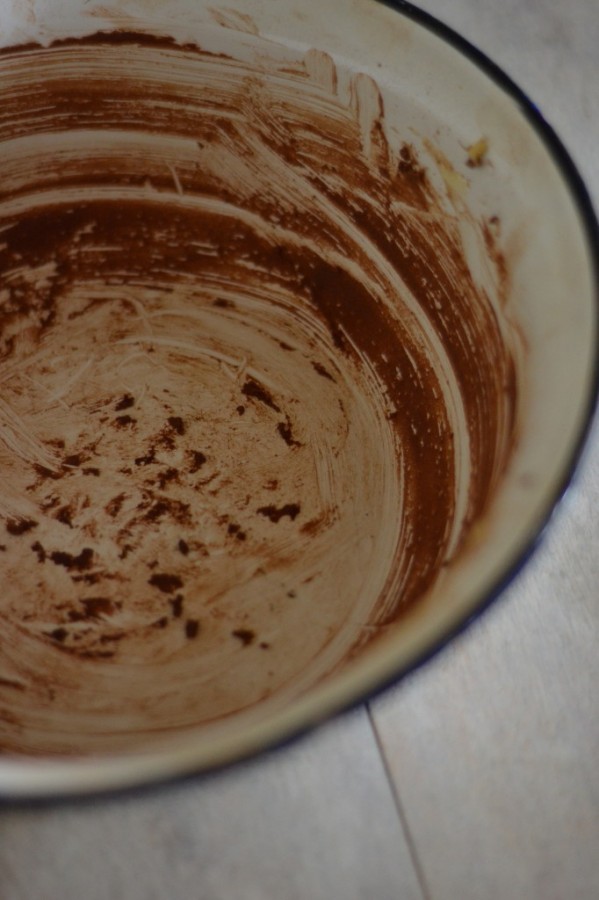 The recipe is from Constance Spry’s cookery book, a tome published in the sixtes and now widely regarded as somewhat of a kitchen bible. The name Constance, or rather the diminutive Connie, is the name I affectionately gave Thea when she was still a tiny image on the sonographer’s screen. Knowing that she was going to make a very early appearance, I wanted to give her a name that would foretell of the qualities that I hoped she would possess as a premature baby.  It seems some nine months later that she does indeed boast the characteristic of steadfastness, Constance’s meaning. I think it’s rather nice that the inspiration for her now middle name came from an esteemed cook. One whose recipe for Chocolate fork biscuits is a firm favourite of mine and hopefully will be one of hers. 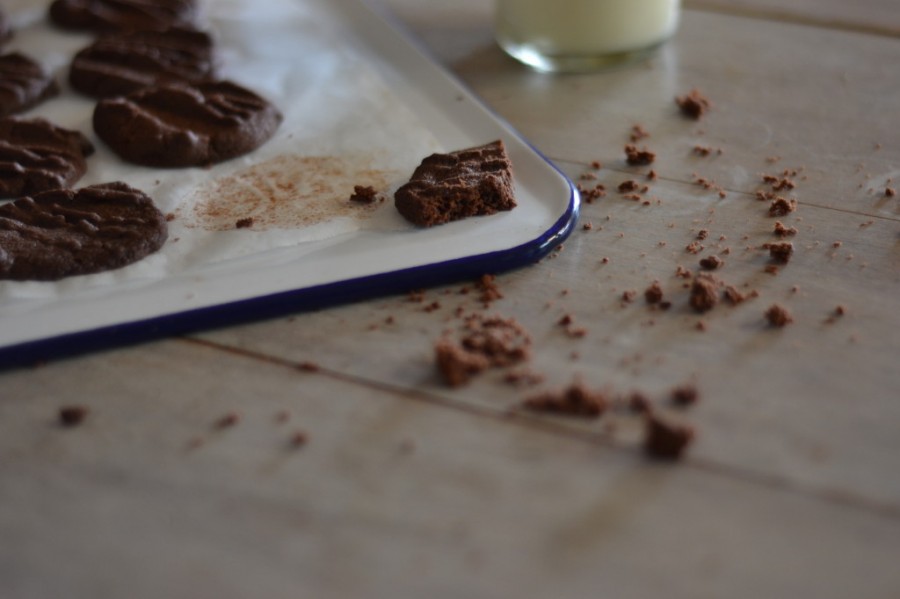 Adapted from a recipe by Constance Spry.

Cream together butter and sugar using an electric whisk. Sift in flour and cocoa and whisk again to combine all ingredients.

Take small pieces of the mixture and form into rough balls. Place the balls on a baking tray lined with greaseproof paper allowing enough room for them to spread during cooking. Take a fork and a bowl of water. Dip the fork in the water and then press in into the biscuit mixture to slightly flatten the balls and make fork indentation in the dough.

Cool on a wire baking tray. 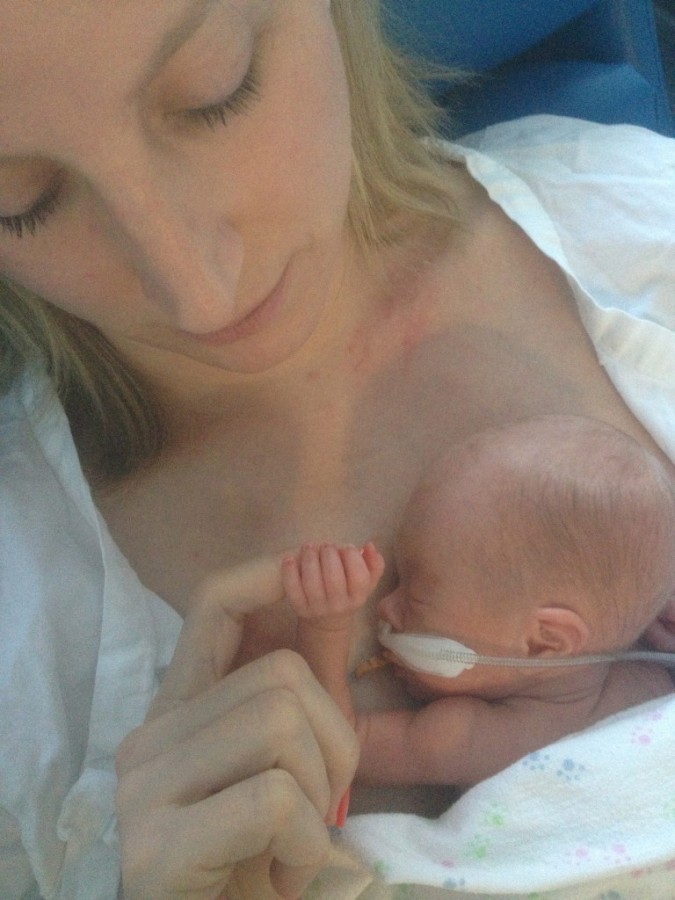 It was only ten o’clock, in the morning that is, but I needed to prepare dinner just so that I could have peace of mind that it was done. Knowing that it would still be in a perfectly edible condition by the time that dinner came around, I made a kale salad. You see my Father in law, or Pa as he is now titled, was coming over and I was in no fit state to cook. Not that he would’ve minded, but I would have felt like I was letting him and myself down if I didn’t prepare something. Thea, and so in turn I, had been awake most of the previous night. Well, more like previous nights. I was getting the feeling that it was time for her to make the move from her moses basket in our room to her big girl’s bed in hers. Originally she was always going to go straight into a cot in her own room to sleep. That was until she arrived early and my instinct to keep her close told me otherwise. Now that same instinct was telling me she was ready to sleep alone and that in time, we would all have a more peaceful night’s rest. With lack of sleep I believe comes the need to eat well, so a kale salad with sausages and garlic bread seemed like a good, as well as easy, idea. 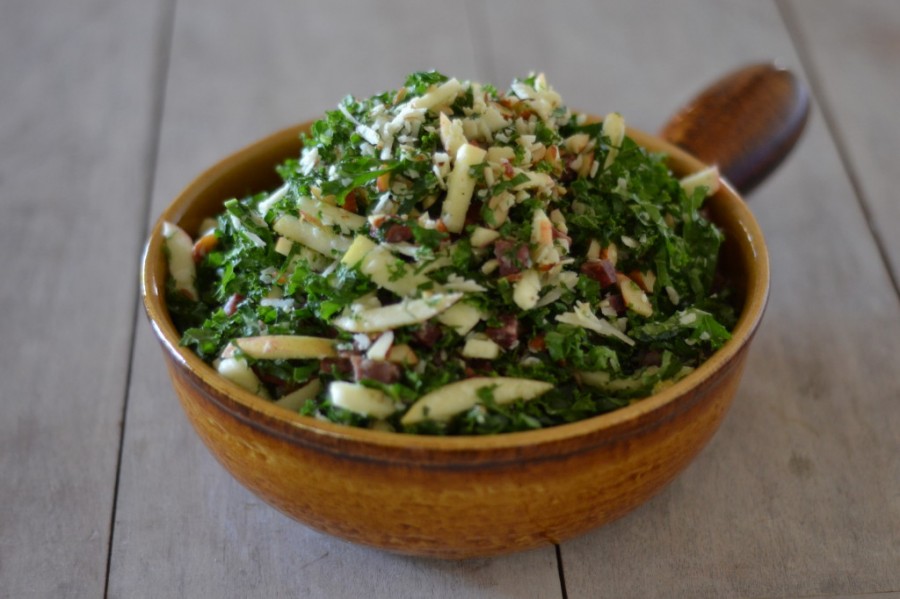 The kale was already in the fridge, bought at the Beaches market on Friday. Heading to the markets early in the morning is a weekly activity that I love to share with Thea. As we weave around the stalls together, strangers lavish her with attention and she offers countless smiles in return. We have been buying regular bunches of kale lately, It keeps so well in the fridge and I am continuing to find new ways to incorporate this nutritious leafy green into my week night dinner repertoire. Blanched in place of basil in pesto, along with spring onions and shredded pork in fried rice, combined with a bechemel sauce and a sprinkling of parmesan to make a gratin and shredded and eaten raw in a salad. The best thing about kale in a salad is that, even dressed, it doesn’t wilt, so preparing this dish during Thea’s morning nap did not affect its quality and it happily remained assembled until we dug into it at dinner that night. I must mention that it is better at room temperature though. 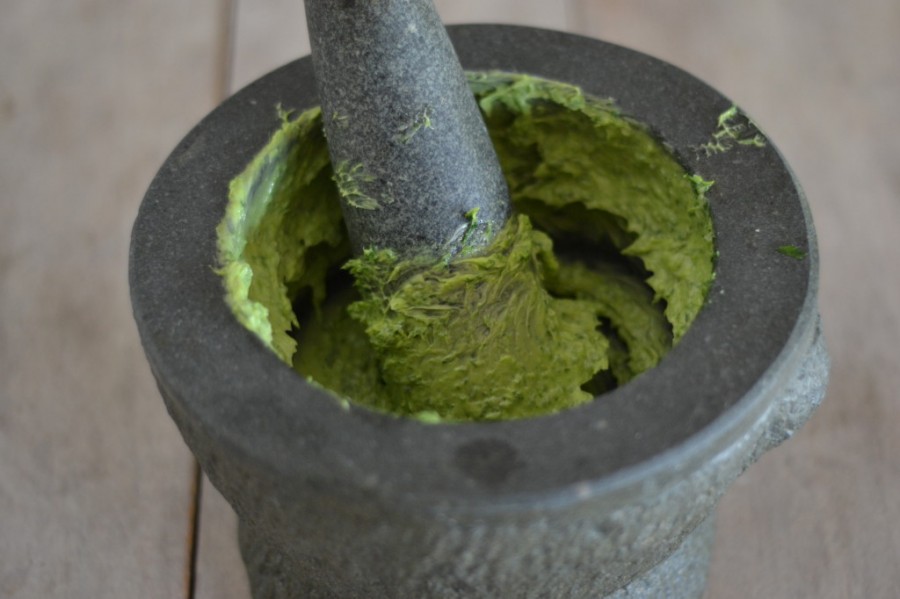 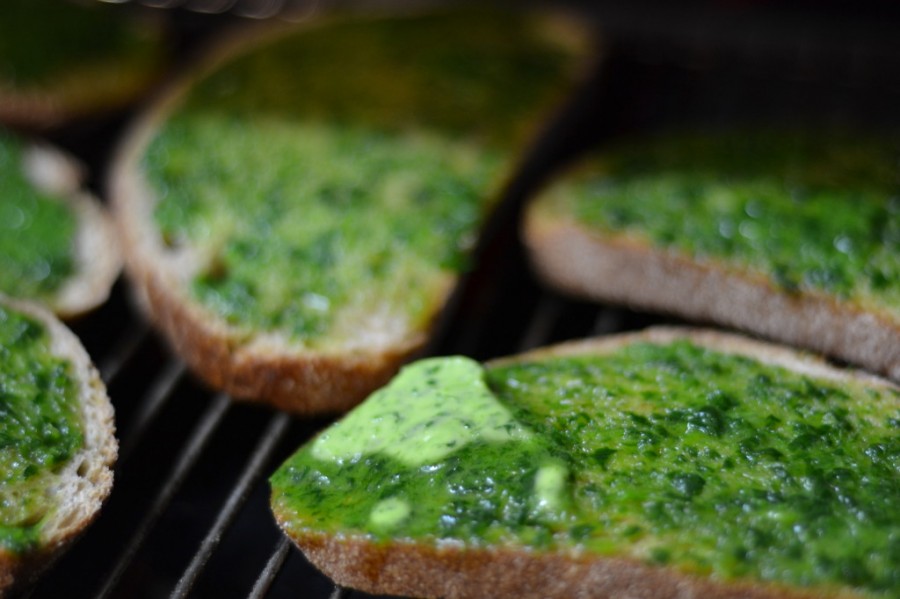 To complete the meal in an effortless but satisfying way, and because I know that Pa likes it, I made some garlic bread. I had some sourdough left over from the weekend that was now a little dry, but still perfect for toasting. In a pestel and mortar I pounded together a few cloves of garlic and a handful of parsley leaves with a pinch of sea salt. When a paste had formed I mixed in a generous amount of soft butter. I spread the resulting verdant butter onto thick slices of hot toast and then popped the toast back under the grill for a few more minutes. While Pa cooked sausages on the barbecue, I removed the cling wrap from the kale salad and laid the table. Dinner was served. As we ate, Thea slept peacefully in her big girl’s bed, in her own room, for the first night. 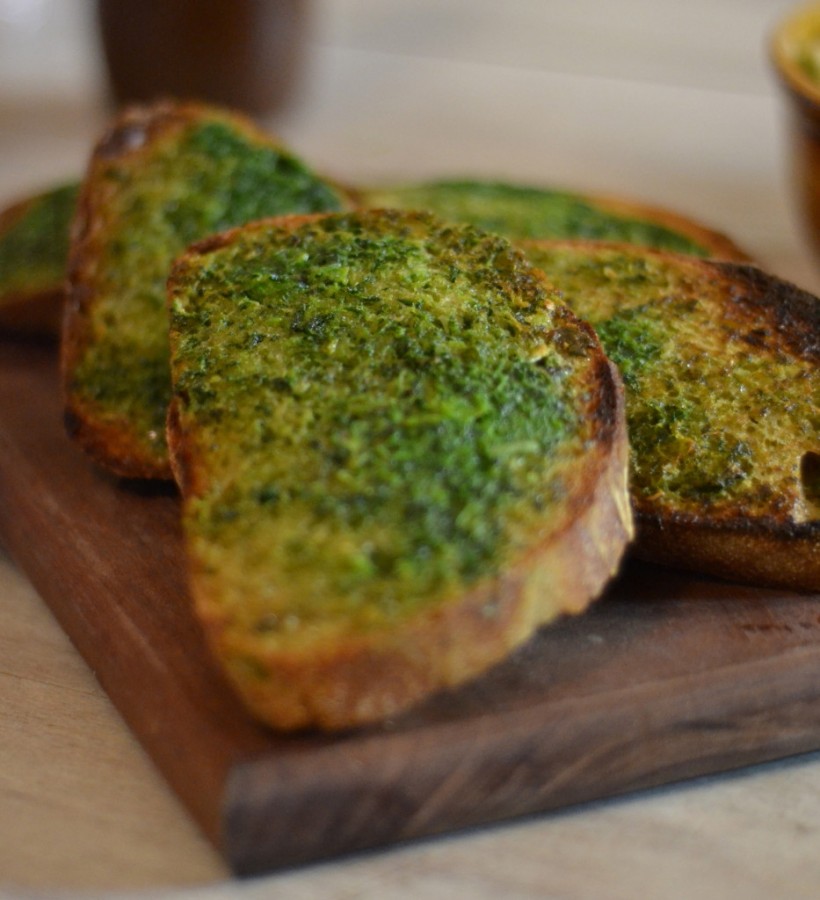 Adapted from a recipe by Marin Mama Cooks

To make the dressing shake all the ingredients together in a jam jar and then leave to sit while you make the salad. the reason that I do this is so that the onion softens.

Finely shred the kale and Brussels sprouts. While you are doing this, cook the almonds in butter over a low heat until slightly coloured, then coarsely chop. Add the almonds to the shredded green leaves along with the Pecorino and dressing.

When you add the dressing to the kale salad, make sure that you really scrunch it in with you hands so that all the leaves are well coated. Enjoy x

NB. I added apple to the salad in the above photo because we were having pork sausages.