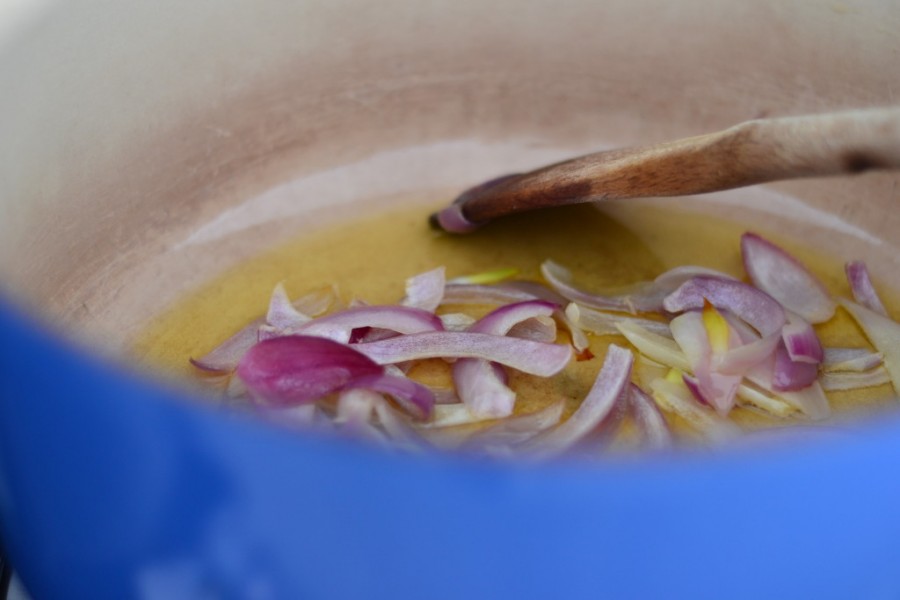 With less than six weeks to go, I’m starting to get nervous. Can I really run the 42 kilometres that is the Sydney marathon. I’ve been diligently training since January for number 27 on my list of 100 things to do in my life. Yep. Running for nearly five consecutive hours, rubbing my skin raw, bruising my toenails and generally exhausting myself has been an ambition of mine for a while. I’m curious to know if I have what it takes to complete the course. I’m definitely not a natural runner. I have stamina. But I’m not a runner. A swimmer maybe. Even a sprinter. Present me with a challenge though and I will grit my teeth, dig in my heels and give it my all. I slightly underestimated how much more I would need to eat though to help me achieve my goal. And although pasta isn’t my go to meal every night of the week, it’s definitely featuring more frequently, to provide the much needed energy. Like this fresh and easy chicken pasta that we had last night. 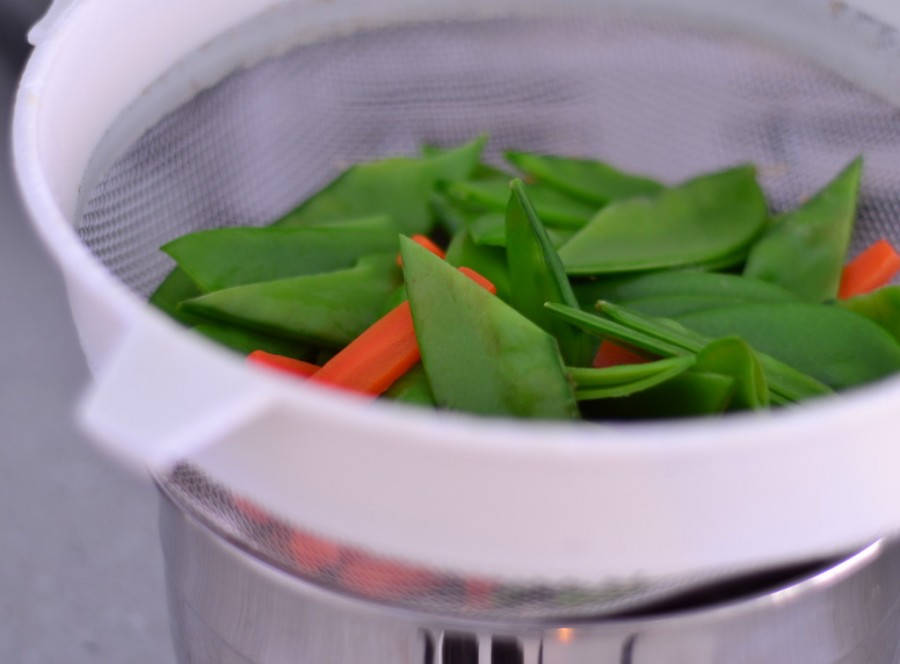 I can’t take the credit for this dish though. In what feels like another lifetime now, while at University in Glasgow, I used to work at Dimaggios, a hugely popular American Italian restaurant in the city’s West End. I was the cashier slash coffee maker slash telephone answerer. It was my first real insight into the fast paced and often frantic world of hospitality. And I loved it. There was the erratic happy one minute shouting at everyone the next head chef, who scared the hell out of me. Then there was moody pizza chef, who equally scared me, yet despite his demeanour, made really good pizzas. And the espresso with three sugars downing manager, who never said very much unless I did something wrong, and then he’d say even less, shake his head and purse his lips to form an expression of much dissapprovement. He definitely scared me. They were all big personalities and I was just a shy student learning about myself and experiencing life freely for the first time. 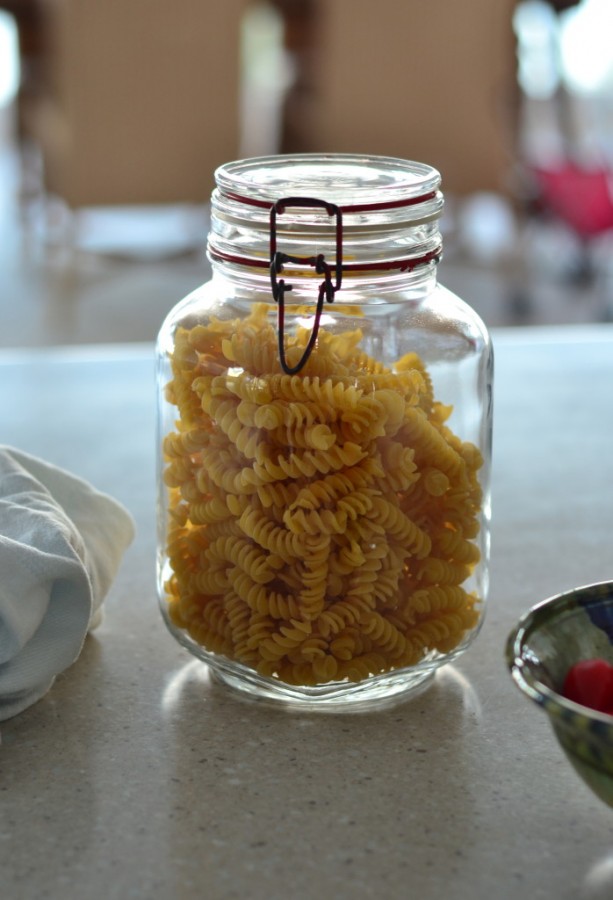 After a busy shift I would often order this easy chicken pasta for dinner. It was named fusili el Greco, signaling to the little cubes of feta cheese scattered through it no doubt. There was also roast chicken, cherry tomatoes, carrot batons and snow peas, lots of olive oil and garlic. Considering the number of other dishes that were on offer, with lashings of cream and rich tomato sauces, I wonder now what it was about fusili el Greco that I liked so much. I think its simplicity. The colourful crunchy vegetables, salty squares of cheese, and garlicky olive oil coated spirals of pasta. Undeniably fresh, yet still very satisfying. Delicious hot or cold.

I find it funny reminiscing about a job that I used to do while studying for an English degree. My dad always told me, just get a degree. It will stand you in good stead for the future, whatever you end up doing. I so wholeheartedly believed him, that it never once crossed my mind that hospitality might be an industry that I should explore more fully. My role at the restaurant was simply for extra cash, right. Just because I felt so at home working there, loved the thrill of a fully booked restaurant on a Friday night and was always sneaking glances into the kitchen to catch a glimpse of the action, I was going to work in marketing, advertising or publishing. Right. Well as it turns out now. No. And answering that question brings me full circle. Because I’m not a runner. Right. Well, in five and a bit weeks, I might prove myself wrong. Again. 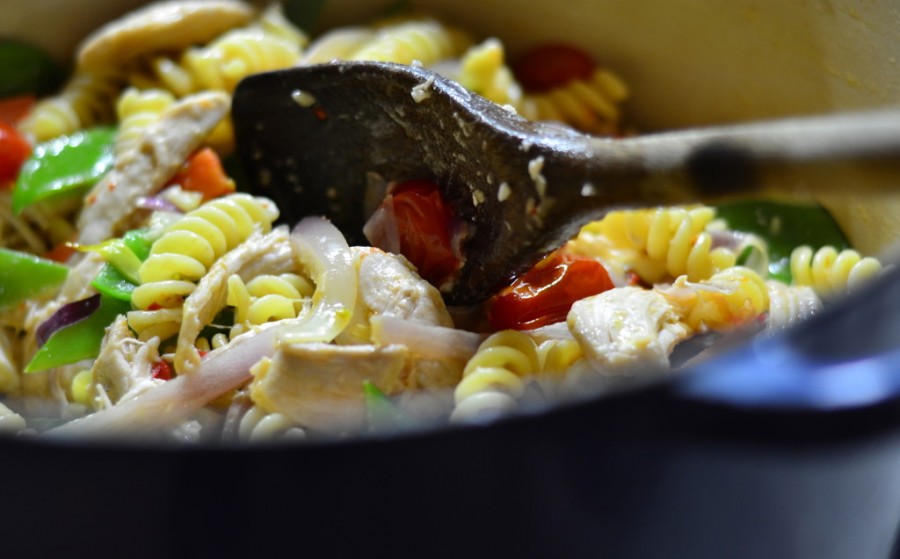 Enough for 4, or 2 dinners and then 2 lunches the next day.

Roast the chicken breast at 180C for 25-30 minutes and leave to cool. When its cool enough to handle, shred the chicken into large strips. Doing this with your hands rather than a knife adds a lovely texture to the dish.

Bring a big pot of water to the boil and cook the carrots and snow peas for about 3 minutes so that they retain some crunch. Scoop them out of the pot with a slotted spoon and plunge them into cold water (iced cold water if you can). This will stop the vegetables from cooking and help keep their colours bright. Once cool, drain and set aside.

You can now add the pasta to the same water that you have just cooked the veggies in. Cook for 10 minutes. Drain but do not rinse and set aside.

While the pasta is cooking, over a low heat, cook the onion in the olive oil until soft, about 5 minutes. Add the garlic and chilli and cook until the garlic becomes fragrant, another 5 minutes or so.

Now add the carrots, snow peas, halved cherry tomatoes and chicken to the pot and stir so that all the flavours combine and everything is heated through. Add the pasta and the feta, stir again, drizzle in some more olive oil if you like, a little sea salt and some black pepper. 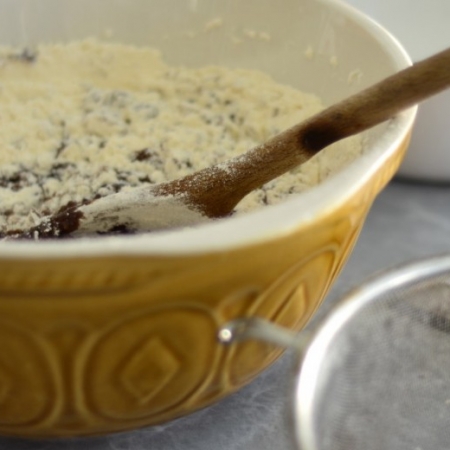 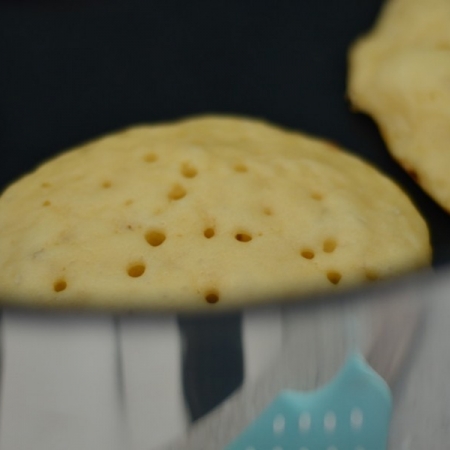 Home made crumpets in under an hour
Scroll to top