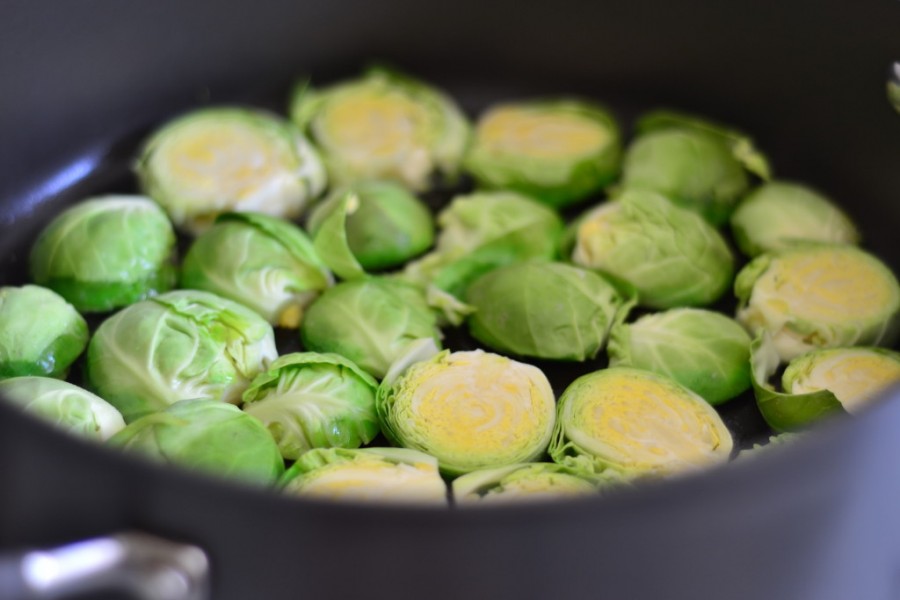 It’s really happening. I’m going to run a marathon. In two days (at the time of writing). If I stop to listen, there is an electric hum pulsing around my body, generated by an amalgam of trepidation and excitement about Sunday’s event. I’m about to embark on something that has been a goal of mine for many years. And that feels good. Like something worthwhile. Like the stuff that life is about. Putting yourself on the line and chasing your dreams. To help in my quest, this week in the lead up to the big race, I’m stuffing carbs into my mouth left right and centre. Toast, porridge, bananas, dates, honey, pasta, rice, vegetables and the occasional snake. Yep. Who knew. Apparently snakes (jelly sweets) are a good source of glucose to help fill my cells with glycogen to burn while I’m running. I’ll try anything once if it’ll help get me across the finishing line. Preferably on two legs. My favourite source of fuel is still pasta though and this penne pasta with brussels sprouts will convert even the most staunch dislikers of these miniature cabbage like vegetables into new admirers. 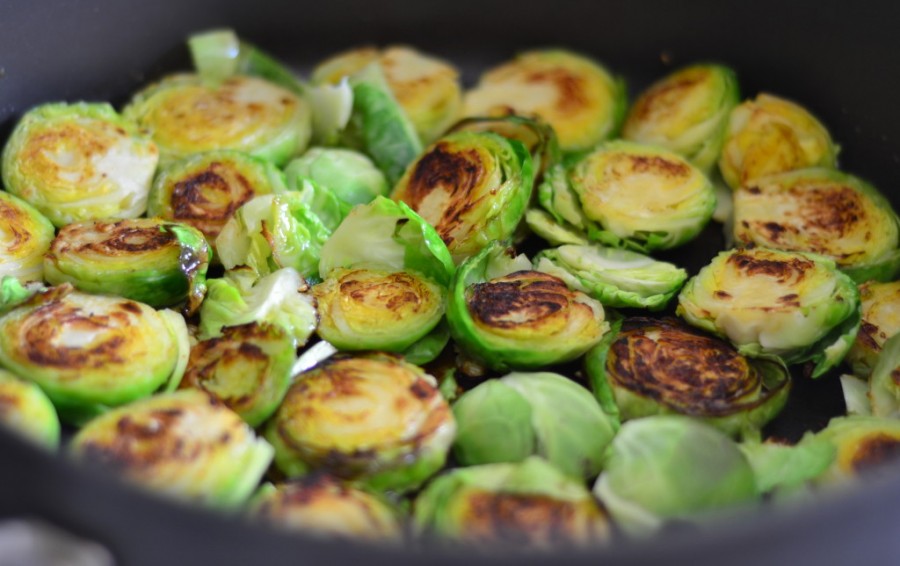 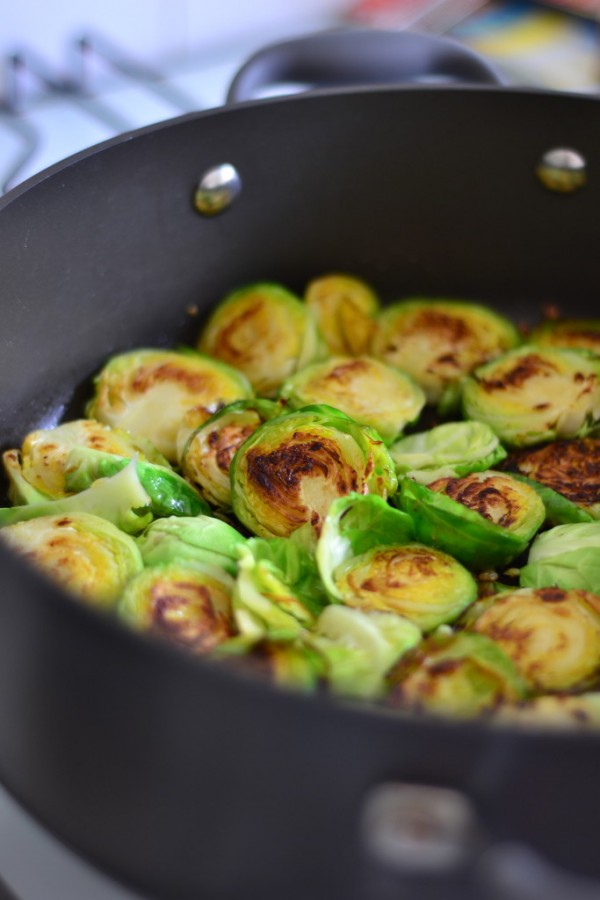 I’ve always fallen into the category of one of those strange people who enjoys eating brussels sprouts. At Christmas, I’d be one of only a few family members who would happily pile a small mound of the little edible green balls onto my plate. As I’ve grown older, I’ve experimented with sprouts, moving away from the simple method of boiling them. I’ve roasted them along with beetroot and the served the resulting medley with crisp bacon and a mapley Dijon dressing. I’ve shredded them to compose a salad with kale, parmesan, lemon and almonds. And I’ve braised them with lemon juice and cream a la Molly Wizenburg. And Molly’s lovely recipe for cream braised brussels sprouts was the inspiration for this pasta dish.

Using the marathon as an excuse, a very good one I might add, we are staying in the city for the weekend. Running long distances seriously takes it out of me and after my longer training runs of 25km plus, I’ve almost needed an afternoon nap. Thea has prevented such luxuries from happening. But hopefully, in the city, in our hotel room, after a warm shower and a big plate of food, I might be able to have a little sleep, before celebrating my victory with a glass of champagne. I need to visualise after the event as much as I do running the course, because I feel that ultimately it will help spur me on to the end. 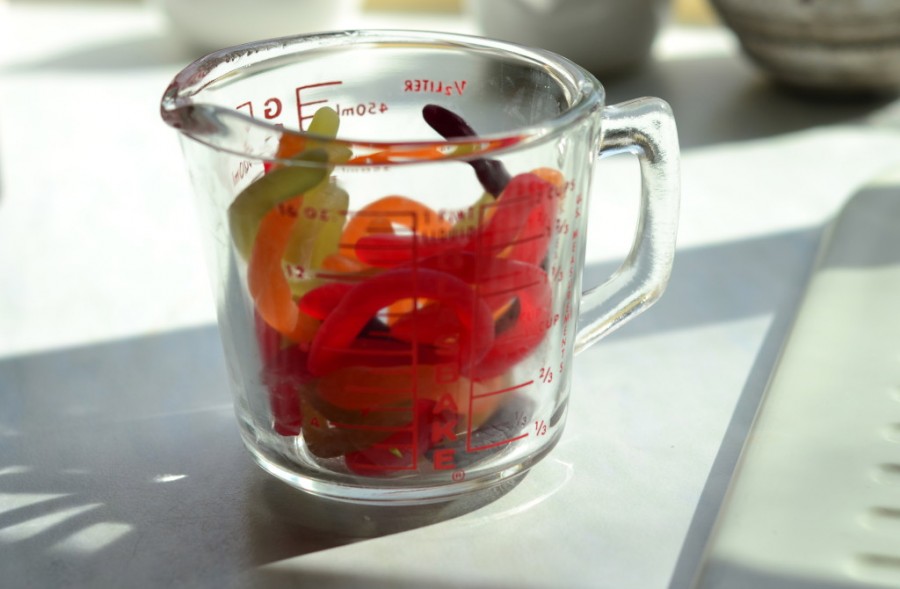 I have also asked Ma and Pa, who have been so wonderful this week in cheerily finishing all the high carb meals that I have prepared (we are still living with them since the tree fell on our house) and will be looking after Thea for the weekend while I’m away, to come and watch me cross the finish line. I knownseeing their faces, plus Mark and Thea’s, in the crowd, will give me the boost I’ll need to get me across that line. More than that though. I feel that I would be doing them a disservice, as well as Thea who has accompanied me on many training sessions and Mark who has looked after our tiny wonder every Sunday while I’ve been off on my longer runs, if I don’t cross the finish at a fraction more than a walking pace. Everyone has been so instrumental in getting me this far and I owe it to them out of gratitude. 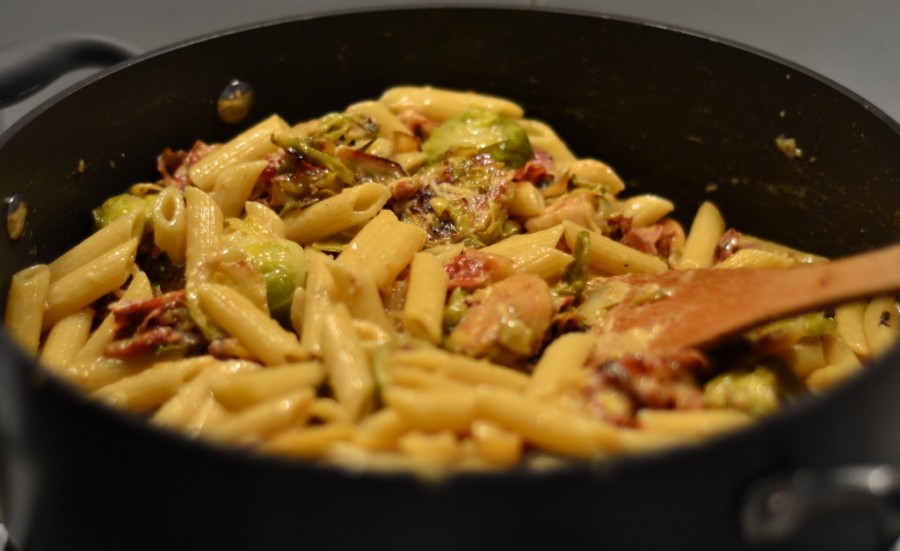 At the moment I’m unsure about whether marathon running will become a regular part of my life or just a one time goal. Getting to this point has filled a big part of the year, from our little holiday on the Central Coast in June when I ran the Bay to Bay half marathon to our now long weekend in Sydney for the full event, not forgetting all of the scheduled runs in between. It’s really fulfilling to have something to work towards and seeing yourself improve, if only in tiny increments. I like the idea of being a runner, able to put on trainers and fill my lungs with fresh air and get my pulse racing with speed and ease. It feels good. And you see the world from a different viewpoint; houses you’ve never noticed, flowers you’ve taken for granted, hills that always seem easy in a car. The nuances of your surroundings come at you in new and interesting way. So maybe I will continue with my running. Especially if it means I can eat more dinners like this penne pasta with Brussels sprouts. Watch this space. 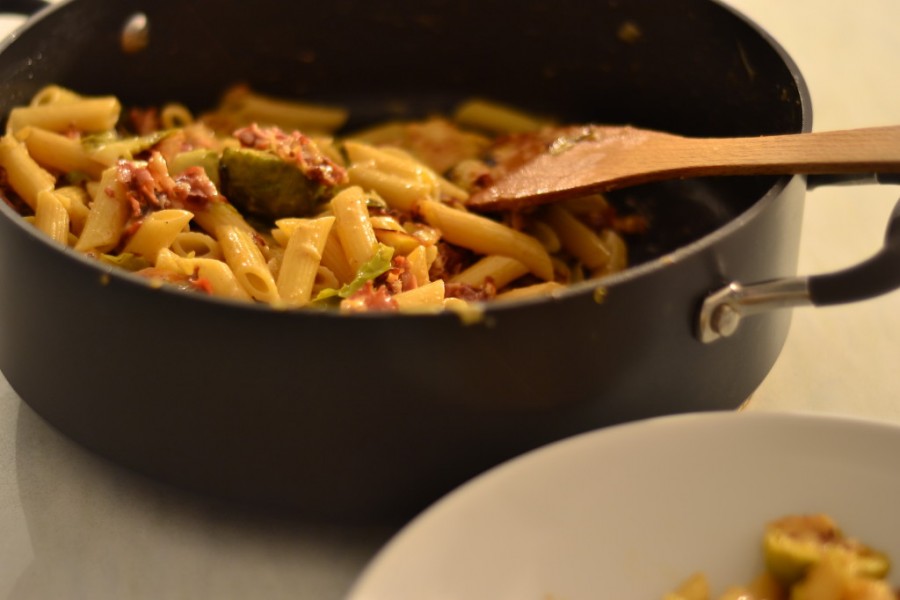 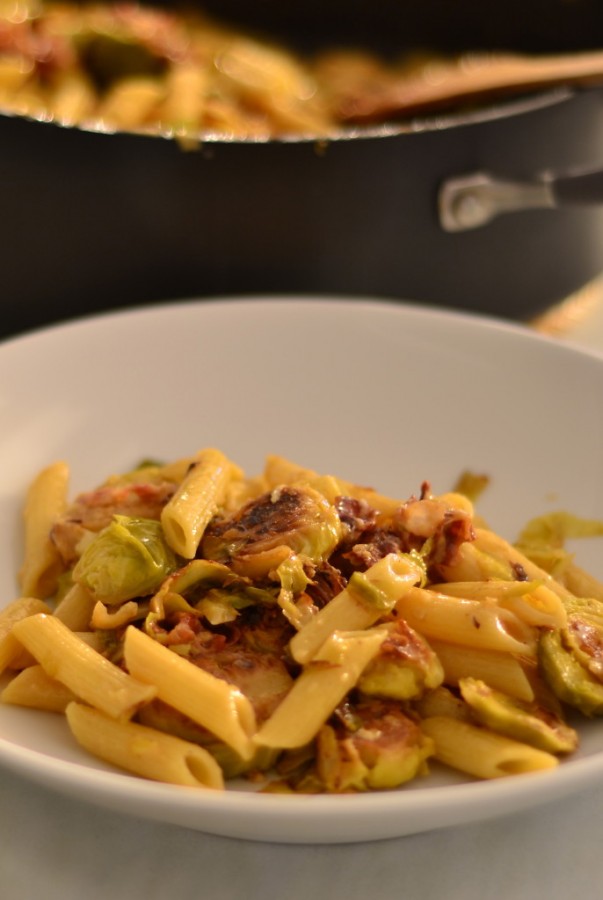 Inspired by a recipe by Molly Wizenberg

Begin by cutting the ends off the sprouts and discarding any loose outer leaves and then chopping them in half.

Melt the butter over a moderate heat in a large flat bottomed pan and then place the sprouts flat side down in the pan and leave them undisturbed to brown for 5-8 minutes. Flip and then cook for about another 5 minutes on the other side.

When the sprouts are browned on both sides, sprinkle them liberally with salt, pepper and nutmeg, add the cream. Bring it to a gentle simmer, then turn the heat down to its lowest setting, put the lid on the pan and leave the sprouts to cook for about 10 minutes. You want them to be soft but still with a bit of bite and not falling apart. Turn off the heat and add the lemon juice.

In a new pan, fry the bacon until crisp and then add to the sprouts. In the same pan that you fried the bacon, with the residual oil, cook the garlic, then also add it to the sprouts along with the parmesan cheese. You can now move to the next step, or leave the sprout mixture in the pan and bath small children, even relax with a glass of wine and proceed to assembling dinner when you are good and ready.

When you are ready for dinner, cook the pasta and when it’s done, to the magical el dente state, about 10 minutes, drain it, but keep a few tablespoons of the pasta cooking water aside. Add it together with the pasta to the sprout mixture. Turn the heat back on under the sprout pan, stir and let everything heat through together. This step helps the lovely earthy creamy sauce stick to the pasta. Decant into bowls and eat. 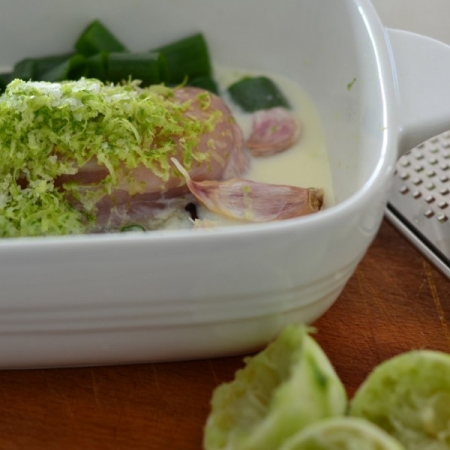 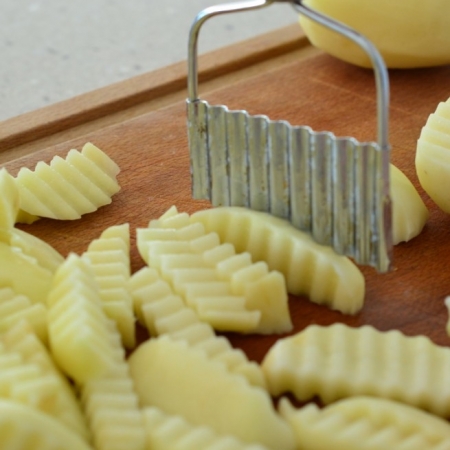