I failed. I missed a week. My intention at the start of the year was to write one blog post a week. Which sounds easy right. But with a small person in your life and the responsibility of a job, and the excitement of finishing your first marathon, yeah I did, but more on that later, sometimes despite the best of intentions, plans get overlooked. I mean I’ve done pretty well so far, even posting the week a tree fell on my house. But this week, I just didn’t. It’s like I used up all my motivation completing those 42 kilometres and didn’t have any left to write. I simply wanted to eat protein after all my carb loading, and take the pressure off myself a little bit. Something I did do though was dabble in the kitchen with a crinkle cutter to make homemade crinkle cut chips, to go with aforementioned protein. 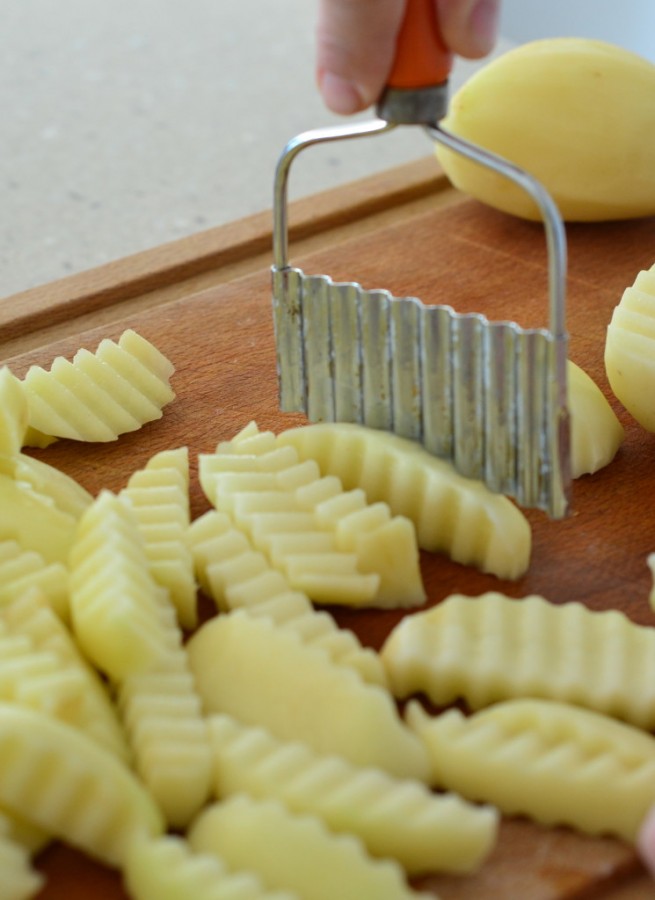 For some reason I believed that crinkle cutters only existed in factories that prepared vegetables for the frozen food isle in the supermarket, which is rather strange since I have most kitchen gadgets under the sun. So when we moved in to Ma and Pa’s house back in April, I was pretty darn excited to find Ma’s crinkle cutter in the kitchen drawer. Any crinkle cut vegetable is fun. I suppose it’s not normal, not the way nature intended, but a bit  playful. Normally I would make little duck fat roast potatoes to go with steak, but this week it was all about the homemade crinkle cut chips. Let me be clear here. I made oven baked crinkle cut chips, not the fried variety. If you’re interested in how to make them, Gourmet Girlfriend has a lovely post on hot chips. It’s not that I’m against deep frying, there is definitely a place for it, but I seem have more success with getting chips crispy in the oven. And since there is always so much washing up in my kitchen from catering, I like to choose the easy wash option when it comes to my own dinner. 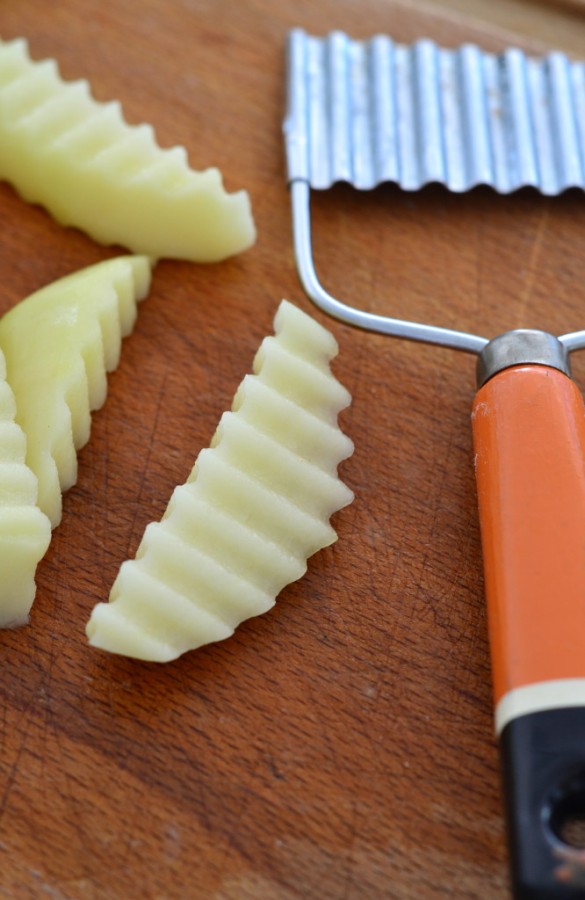 Something else that I failed to do this week was go for a run. Due to a bruised toe, I couldn’t walk, let alone run. And that felt strange after months of diligent training, to not have to worry about maintaing my run fitness. But I missed it. I felt restless. Part of my routine was lacking. Which allows me to now answer something that I had wondered in my last post before I ran my first marathon. Would I want to do it again? Hell yes. My competitive streak says, you can do it faster next time. You can train a bit harder. You can get new trainers and a fancy watch and really go for it. Those last 10 kilometres were hell, but it’ll be better second time around. 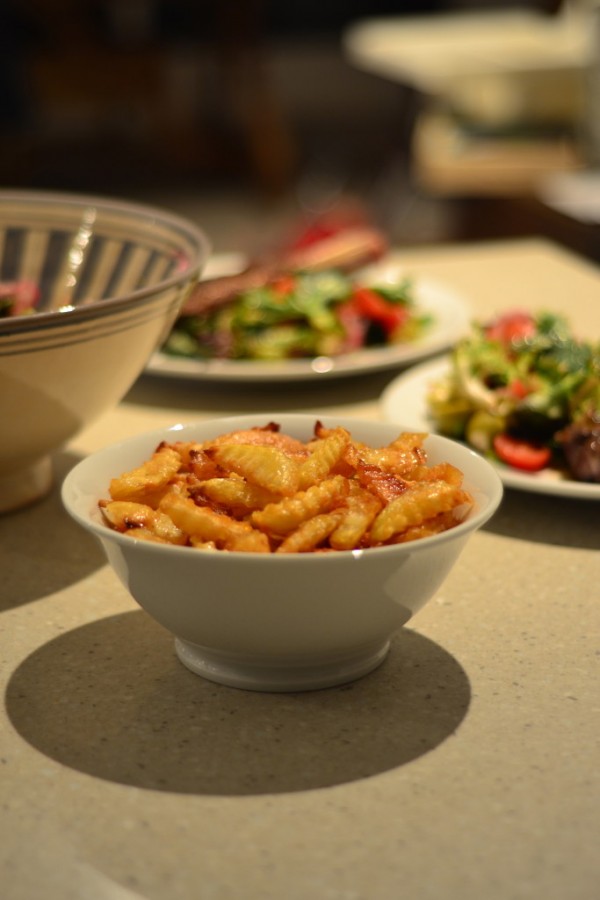 Sydney marathon was a lot of fun. Being able to run over the Harbour Bridge with choppers flying overhead was exhilarating and the first five kilometres flew by. I drank water at every drinks station, half in my mouth half over myself as I kept moving and after all the carbohydrates that I had consumed in the week leading up to the event, my body felt strong. Around the Botanic Gardens, through Kings Cross where late night revellers who hadn’t yet been to bed watched on, round the SCG and Centennial Park, back towards the city. Entering into 30 kilometre territory is where my body started to demand that I stop, or at the very least walk for a bit, but I kept going. Through The Rocks, around Pyrmont, round Circular Quay and towards the finish at the Opera House. I must’ve had a lot more gas left in my tank than I gave myself credit for, because I sprinted the last two kilometres. And then I crossed the line. That strange emotion of elation mixed with tears of relief flooded my heart and I was so happy to embrace my family who were waiting for me. I had done it. And I was still standing. 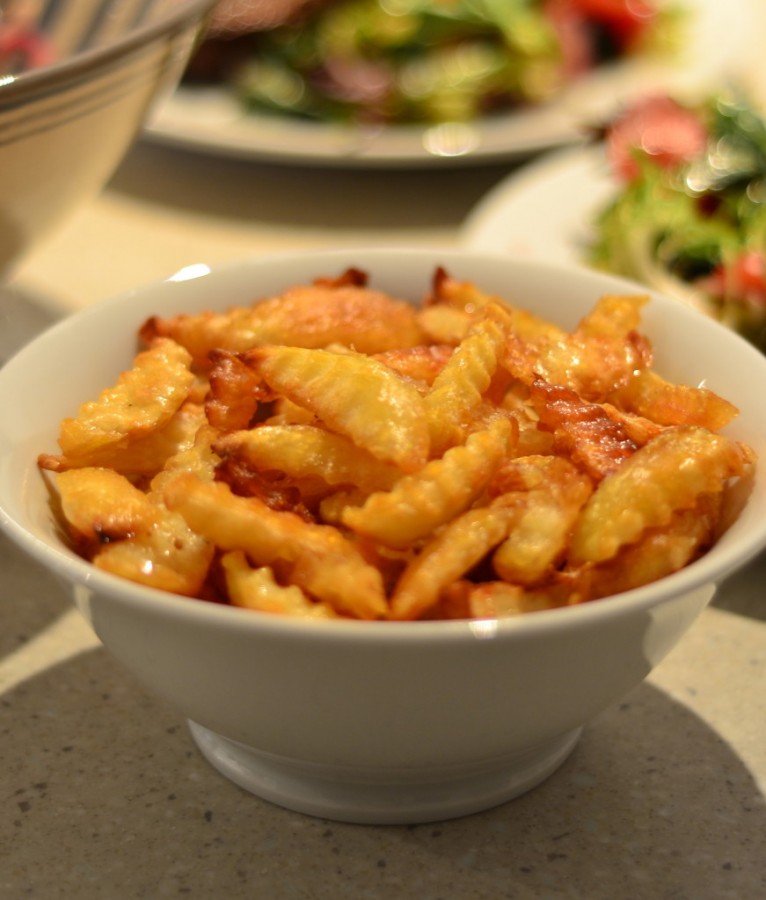 Thats the thing. Even if you miss a session, you have to continue on, rather than see the miss as a sign of failure and give up. So without further ado, my recipe for oven baked homemade crinkle cuts chips is below, and I’m off for a run.

Begin by peeling the potatoes. Sometimes I don’t peel roast potatoes because I like the texture of the skin and the nutrients that it provides, but for homemade crinkle cut chips, I think they need to be completely naked. No bits of skin anywhere.

Now, using the crinkle cutter, or a knife, cut the potatoes into thick batons. I like to cut the base off the potato first so that I can then use the flat surface that I have created as a stable base to stand the potato on while I cut the remainder of it up. This is a great tip when cutting up all veggies, it makes life easier and avoids the knife slipping into your fingers.

Ok, so chips cut. Next par boil them until they are soft enough that you can insert a knife into them with little resistance, but not so much that they are starting to fall apart. To do this, place the chips in a pot, cover them with cold water (this helps to remove the starch) and bring to the boil. Boil for about 10 minutes but maybe 15 depending on the potatoes.

Now gently, so as not to break the chips, drain them. At this point, as in so many of my recipes, you can spread the chips over a tray and leave them in the fridge to dry out, anywhere from a few hours to overnight.

To the cooking part. Preheat the oven to 200C. Place a large tray with about 2-3 tablespoons of oil on into the oven to heat. This step allows the chips to start cooking as soon as they hit the tray, rather than steam as they heat from cold. It ensures, or at least I believe it does, a crispy chip. So when the oil is hot, about 5 minutes, tip the chips onto the tray and they should begin to sizzle immediately.

Make sure that the chips are in one even layer. If you need to use two trays to achieve this, then do. Again, it avoids the chips steaming and helps them cook evenly.

Bake the chips for about 40 minutes to an hour. I don’t meant to be vague, but the cooking time does depend on your oven. Basically you are looking for crisp, golden, crinkly batons. Do toss the chips occasionally with the appropriate weapon, to make sure that they cook evenly. And that’s it. Sprinkle your homemade crinkle cut chips with salt, dip in the sauce of your choice and enjoy.

This steak would go deliciously well with these chips.